Enjoy a Self Guided Walking Tour

We are situated in the Golden Vale.The vibrant village of Broadford is 2kms from Glenview Lodge and winner of ‘Ireland’s Pride of Place’ the 32 county community All Ireland Competition. Have a drink in one of the local pubs or stroll through the arboretum and view the native trees and shrubs. An area steeped in heritage, visit the Mass Rock and the Killagholehane Church ruins. Meet friendly and welcoming people. Gaelic games are played regularly, attend one of the local matches.

Arboretum
Situated opposite the Church. The old limestone quarry has being ecologically restored as an arboretum for native trees and shrubs. These are of Irish genetic provenance. On your Irish family holiday find time to enjoy nature and read the informative storyboards at the arboretum.

Daithi O’Brudair Monument. (positioned across from Church)
O’Brudair considered Ireland’s greatest poet of his age lived in Broadford in 1600s was a student in the Local Broadford O’Daly Bardic School. He was Bard to the Fitzgerald family in Springfield Castle (situated between Broadford and Dromcollogher).

Sir John Fitzgerald who was O’Brudair’s principal patron and kindred spirit went to France with Patrick Sarsfield after the Treaty of Limerick. Springfield was then a place frequented with harpers and bardic poets plying their art. All part of our West Limerick Heritage.

Village History storyboard
Located across from the church. This outlines the history of Broadford village.

Broadford Ashford Walking Trails
Trailhead/Starting point for these trails is at car park across from Church at Broadford and Ashford. Click here for outdoor activities or go to trails website http://walkbroadfordashford.com/

Millennium garden
This is a small garden located next to the Grotto in the village. The names of all the families who were resident in the parish in the year 2000 are marked in stone on the surrounding walls. A stone memorial is also positioned in the garden remembering the unbaptized babies and others who were buried in centuries past in the Cillin at Killilagh 3kms from the village. A sad part of our history.

Mortimer Duggan plaque
Across from the car park a plaque indicates the location of the killing of our village schoolteacher during the Irish War of Independence.

The Sheehy Brothers Storyboard
Located at the front of the Creamery (now the enterprise centre at the end of the village) is a historical storyboard outlining the story of the Sheehy family who have their origins here in Broadford. The brothers David and Eugene were born here in Broadford County Limerick. David was the Irish Parliamentary Party M.P and his brother Fr.Eugene was known as the Land League Priest. Both campaigned against evictions, injustice and inequality during the land wars. The plaque was unveiled in 2017 by Dr.Micheline Sheehy Skeffington.

Childrens playground
This playground was developed some years ago and is a favourite with all the children.

Killagholehane cemetery and church ruin (just down the road from Glenview Lodge and part of the local walking trails route.)
The first written records of the church occur in the year 1209 but the present church was built in the 15th Century. It was the parish church. The church is a national monument and is cared for by the Office of the Public Works. This cemetery was also used to bury the famine dead during the 1840s, a plaque on the church wall acknowledges this. Within the burial ground adjacent to the church is an important Republican plot and the headstone commemorates the deaths of local people during the Irish War of Independence.

Storyboard adjacent to Killagholehane cemetery
Situated adjacent to the cemetery the storyboard outlines the story of the Sullivan family, the Big House, Irish famine notes, mass paths and flora and fauna in the Broadford area. 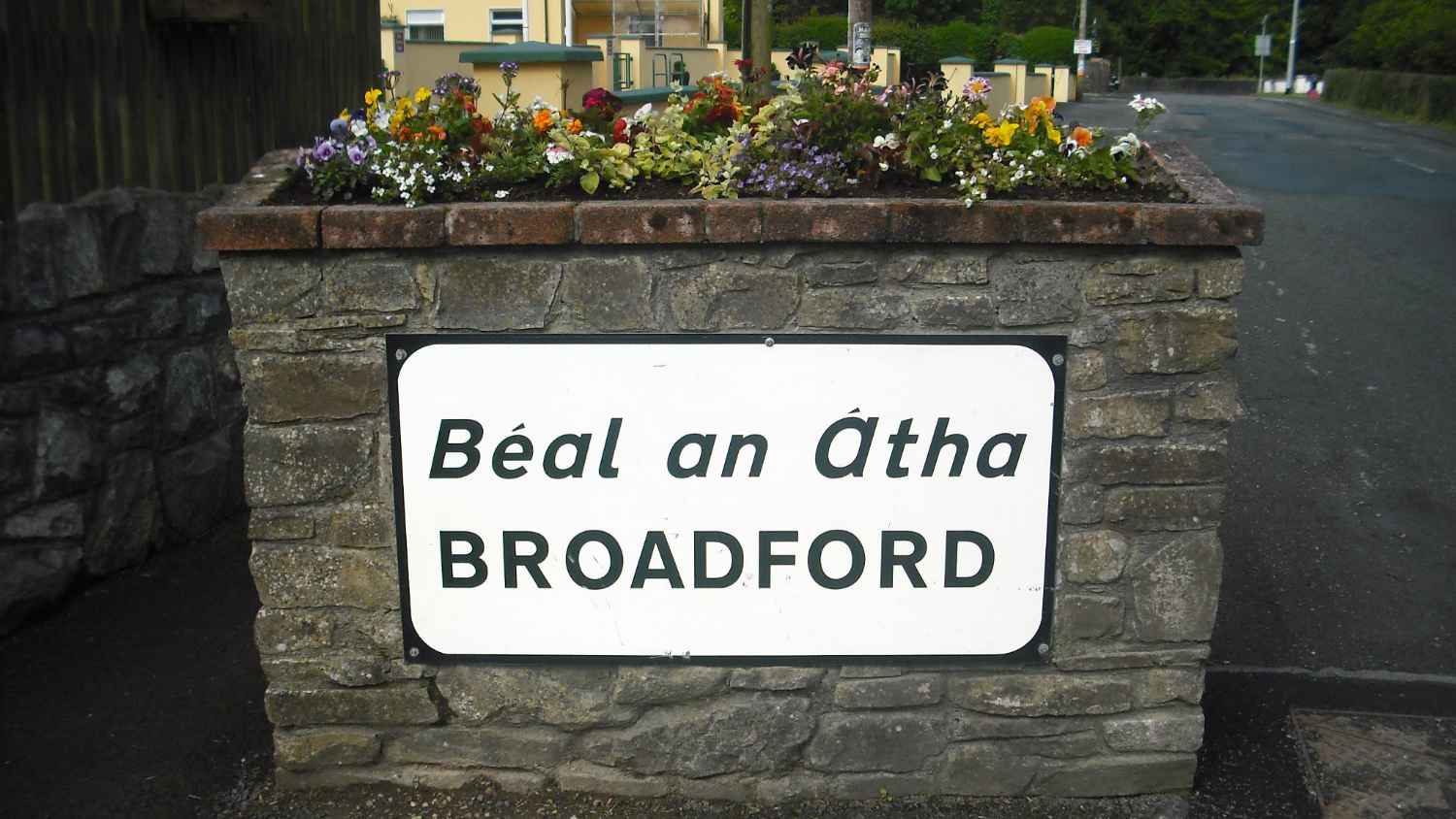 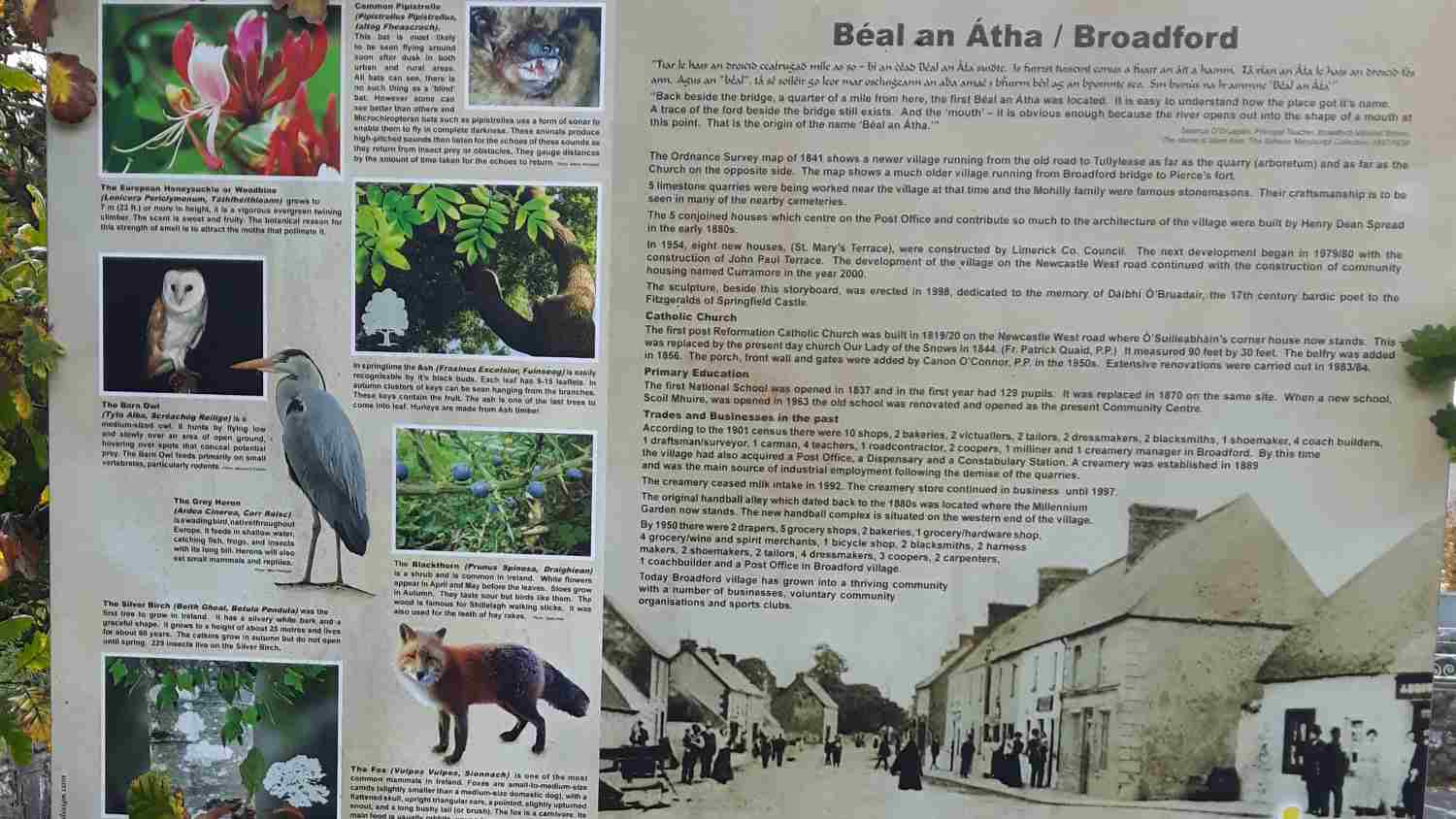 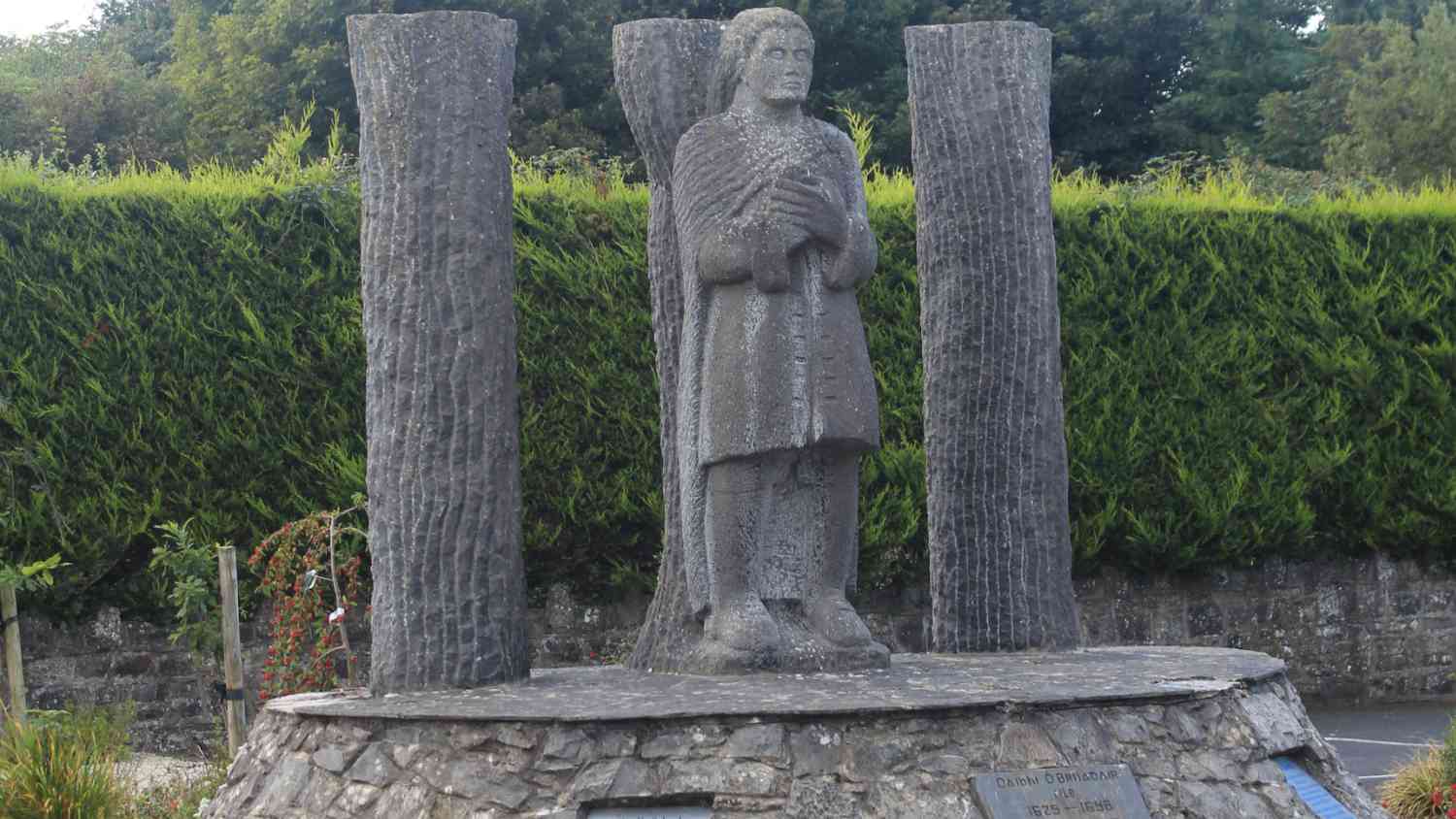 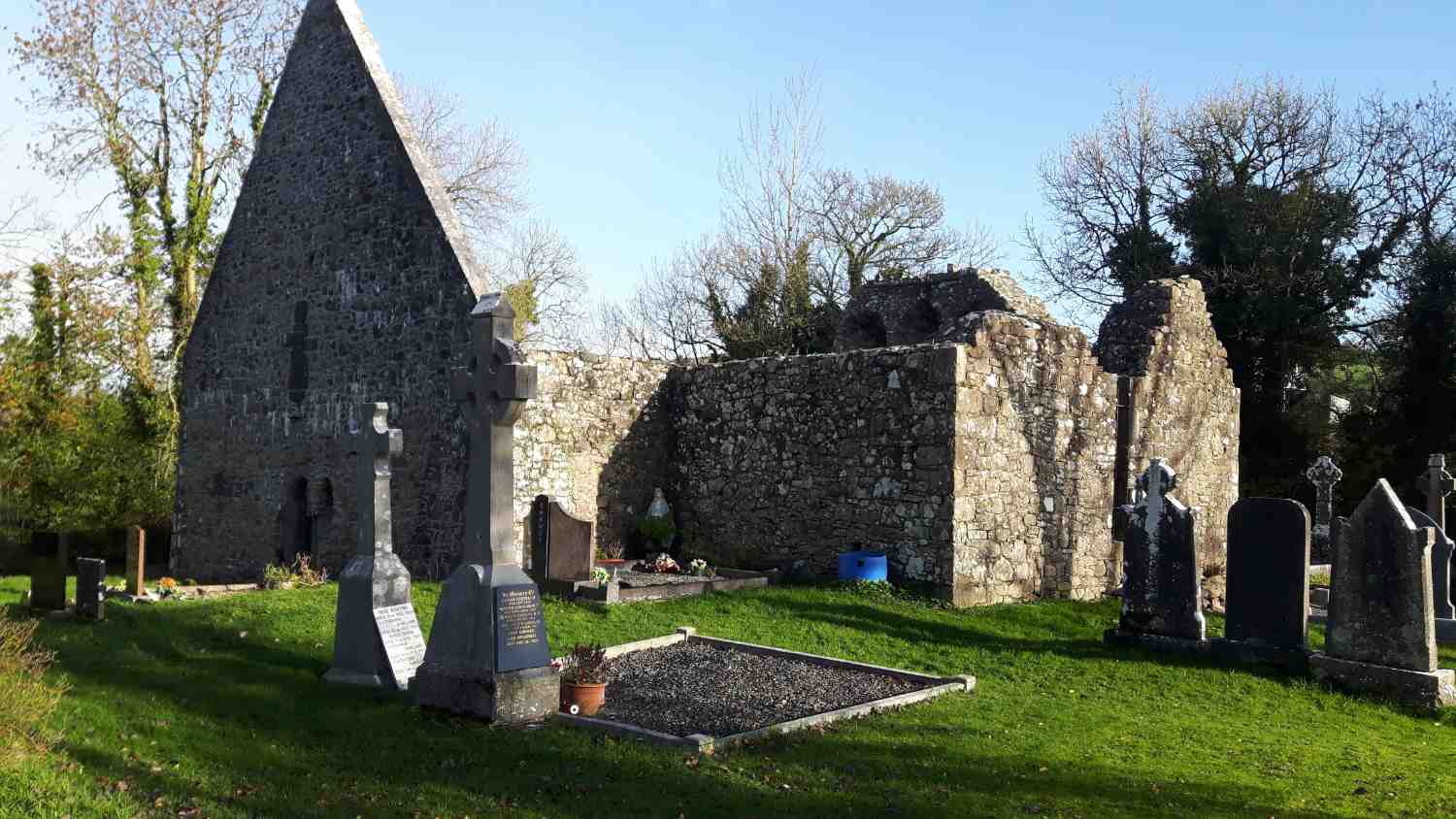 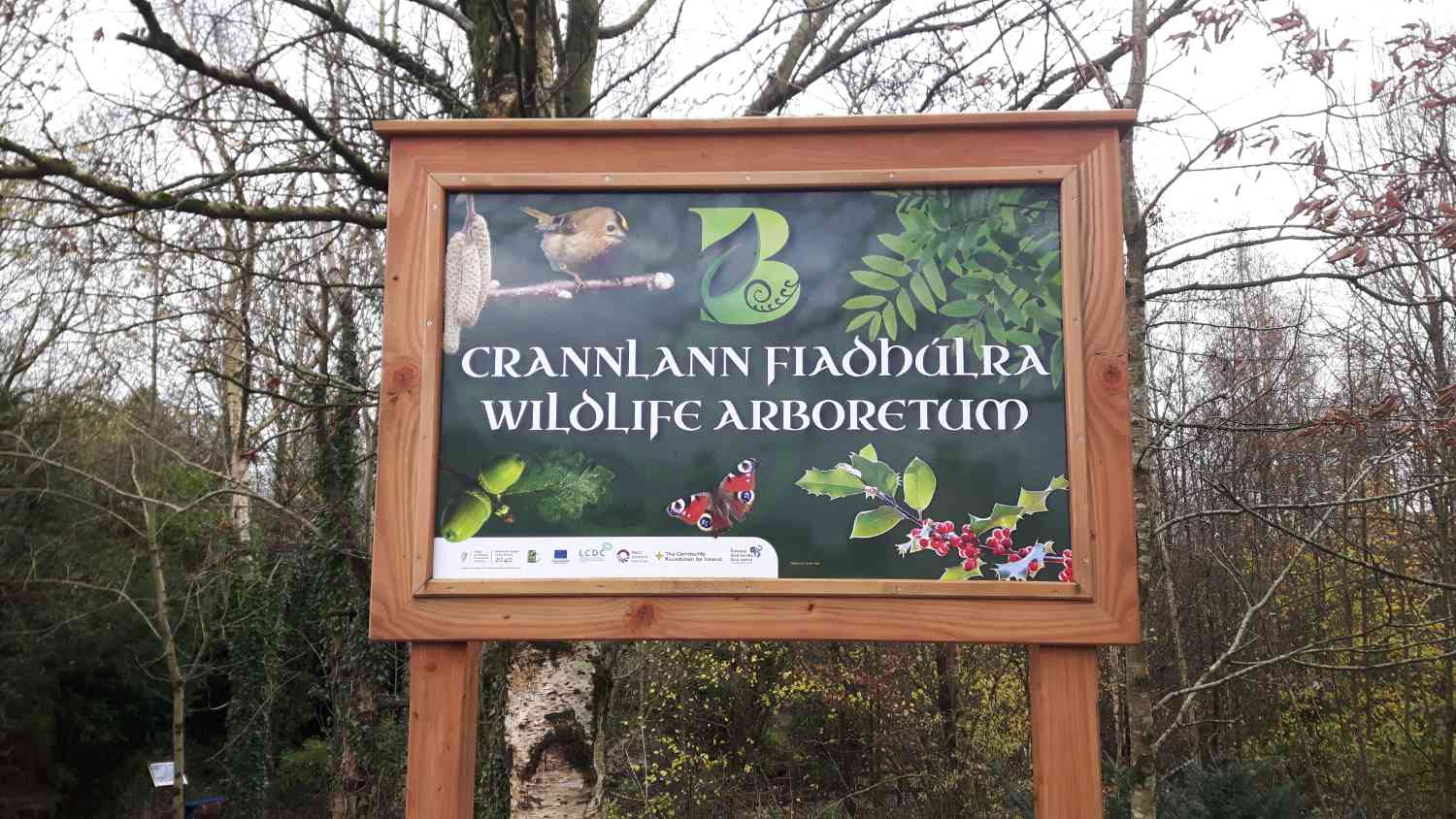 Read the storyboard in front of the church and learn about the Ashford village history. This is the starting point for 4 of the Broadford Ashford Walking Trails. Walk the short 1.3km.Ashford Woodland Loop or venture further and complete some of the longer walks. The perfect family holiday activity.

Mass Rock (a storyboard at the roadside tells the story)
Discover some local Irish history. Situated just beyond Ashford Village. In the late 1600s early 1700s Catholic religion survived through the efforts of priests who remained among the people and went from place to place saying Mass in remote locations. The elevated and wooded position of this Mass Rock gave security against the surprise attacks and an escape route for the priests and the people.

Glenquin Castle
Situated a few miles from Ashford at the side of the road. One of the finest Irish tower houses to survive from the 16th century.
This Irish castle was a fortified dwelling, for the protection against raids and invaders, more correctly described as a Tower House. (not open to public but can be viewed from castle yard.)

(A small town and part of the Dromcollogher Broadford Parish, 10mins. from Glenview Lodge)

The individual plaques on the Heritage Trail in Dromcollogher and the Information Boards in The Square are linked to the articles on this site. https://www.dromheritage.ie/

The interactive map can also be used to take a virtual tour and discover the locations on the Dromcollogher Heritage Trail.

Call to Tullylease village County Cork and visit the holy wells. Tullylease is the site of this Irish Monastery founded by St.Berichter in 664.The present remains of the church includes portion of the 12th.13th and 15th.century building. When in Tullylease visit the restored ancient cart wheel banding area.

Call to Newcastle West for some retail therapy. The town is well known for its fashion boutiques. Visit the Desmond Castle and Banqueting Hall built by the Earls of Desmond in the centre of the town and call to the famine graveyard. Stroll at your leisure through the castle demesne.

Wild Encounters is a small animal facility between here and Newcastle West and home to a range of exotic and domestic animals such as birds, small mammals, reptiles, amphibians and bugs. https://www.wildencounters.ie/

(near Ballingarry 20 mins from Glenview Lodge).

This wonderful 9km moderate mountain hike is a trail steeped in history and folklore. Click here for outdoor activities.

(for walkers and cyclists 20 mins. from Glenview Lodge)

Click here for outdoor activities for details of this 39 km route along the old railway line or check their website.

The sanctuary welcomes visitors as the donkeys love the added fuss and attention they receive. Enjoy a stroll through the farm. https://www.thedonkeysanctuary.ie/

Restaurants for all tastes and budgets are available using locally produced quality food. Your selection can be from a Michelin Star in Adare to local pub grub. We can provide you with a list of restaurants within 30 minutes of Glenview Lodge.