Stay at this historical home and enjoy a perfect Irish holiday

We offer you an enthralling sense of history and heritage.

Dermot Sullivan of Ballykennedy, Cloncagh, Co. Limerick in the province of Munster bought land in Broadford including the land now containing Glenview Lodge in 1685 from John Anketel Senior and John Anketel Junior of Farrihy, Broadford. When Dermot died in 1708 his son John Sullivan inherited the land.

John Sullivan died in 1737. His son Jeremiah (Darby) Sullivan inherited the lands. Jeremiah lived for a time in Co. Limerick but lived mainly in Dublin. At this time he also bought lands and a dwelling house in Kill County Kildare where he lived until his death. His property at this time in Limerick was being rented. Jeremiah died in 1768, the lands were inherited by his son Maurice Sullivan who lived in Kill House in Kildare until after his father’s death. Maurice had two sons Jeremiah and Francis.

This was only a few years after Cromwell’s reign of terror in Ireland. He came to Ireland in 1649 and was replaced by Charles 2nd in 1660. When he left Cromwell had either killed or transported 25% of the Irish population.
In 1691 Patrick Sarsfield was forced to leave Ireland for France after the Treaty of Limerick and he was accompanied by John Fitzgerald of Springfield Castle here in Broadford, they then both fought in the French army.
Between 1709 and 1714 many Palatine emigrants from Germany settled in County Limerick and their descendants are here today.

Curramore House was occupied by a small force of Republicans during the Irish Civil War and on the approach of Free State Soldiers into County Limerick around August 1922 they burned down the beautiful mansion. Herbert left Ireland for England in 1918. Francis may have come to live in Glenview Lodge at about 1825.

It was at this time that Daniel O’ Connell was fighting through peaceful means for Catholic Emancipation (i.e.) the removal of legal discrimination against Catholics. Henry Ford’s grandfather was at this time still living in County Cork (he left in the mid 1850s.) Henry later founded the Ford Motor Company.
Former British Prime Minister Margaret Thatcher’s great grandmother Catherine Sullivan (Selewin) resided at this time in County Kerry, Catherine emigrated in 1830.

At this time the house existed much as it is today but may have extended a little further towards the south. The house is shown on the 1840s ordnance survey map. The stables and cow house were also in position and a house garden was at the rear. The well would also have been as it is today. Francis and Ann reared their family Maurice, Michael, Ann, Catherine, Mary Ann, Bridget and Elizabeth at Glenview Lodge.

Francis Sullivan R.M the Resident Magistrate was well liked in the area and considered a conscientious and honourable man. He was known for his lenient sentences. He provided assistance and distributed food to the starving during famine times. By 1852 he was bankrupt himself but he secured Glenview by deed for his children. Glenview Farm then measured 36 acres and was owned by Francis. 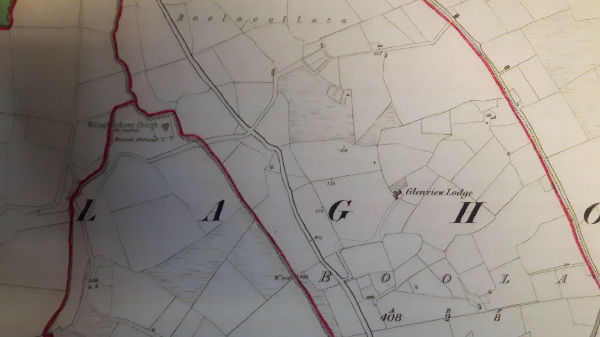 The Fitzgerald family resided in Bruff, Co.Limerick at this time. Thomas Fitzgerald emigrated in 1852 and his great grandson later was John Fitzgerald Kennedy President of the United States of America (USA).
From 1845 to 1852 with the failure of the potato crop famine ravaged the countryside. It is estimated that 1million died and 1 million emigrated.

Around the year 1900 James Joyce became very friendly with the Sheehy family in Dublin whilst attending parties at their house in Belvedere Place. The Sheehy family were originally from here in Broadford village. The family were later mentioned in James Joyce’s Ulysses and Stephen Hero. A world far removed from life here in Broadford at that time.

When Elizabeth died in 1925 Glenview was inherited by her only child Elizabeth McGuinness. The property was now reduced to 30 acres because of a field being given as a dowry to Elizabeth’s sister Catherine when she married her next door neighbour John McMahon.

At this time Elizabeth and her husband John lived in Appletown Hall in Feohanagh Co.Limerick. They began the renovation of Glenview Lodge in 1927 which included a new roof and the re-building of some walls. When the work was completed in 1928 they left Feohanagh and moved in with children Maura and Lily.

This was just five years after the Irish Civil war ended in 1923. 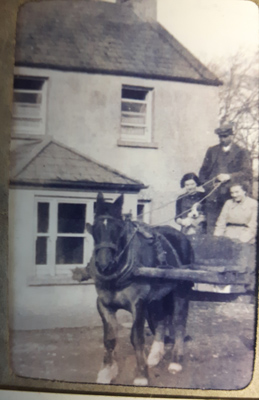 Maura Flanagan and her husband Michael began their married life at Glenview Lodge in 1947. The orchard was planted in 1948. Sometime later the front porch was constructed. Things have changed a little since then!

Ireland’s Hydroelectric Power Station opened in Ardnacrusha in 1929 but electricity only came to this area in the 1950s. The ‘wireless’ and the gramophone were enjoyed at this time before the television came in the 1960s. During this time as was customary, locals called at night time for 45 card games and a bit of Irish music. Maura had learned the fiddle from a blind music teacher who called to the house when she was a child and she also played the button accordion.

In 2005 renovation works began and in 2006 the farmhouse holiday home was opened. Monica, Seán and their children Maureen and Michelle now welcome visitors to Glenview Lodge.